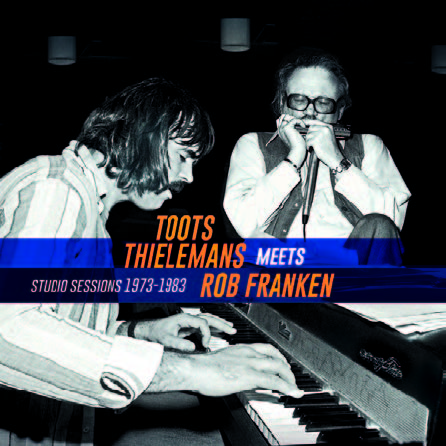 Toots Thielemans was born in Brussels (this is his centennial year) and, as a boy, was drawn to the music heard locally. Playing accordion, he became exposed to a wider variety after moving with his family to France. By the time they returned to Belgium, Thielemans had come under the spell of Django Reinhardt who inspired him to learn guitar and it was on this instrument that he first became known. Following World War II, absorbed in developing modern jazz, Thielemans played the Paris Jazz Festival and made important connections in American circles. He relocated to the U.S. in 1951, recording with Zoot Sims and playing with Charlie Parker’s All-Stars before being hired by George Shearing. With the pianist, he performed not only on guitar but also harmonica, through which he carried the airy sound of his first instrument. Thielemans was soon celebrated for the chromatic harmonica with which he wove melodic lines of great flexibility and emotion. He worked with everyone from Bill Evans and Peggy Lee to Shirley Horn and Jaco Pastorius, but it was the Dutch pianist Rob Franken with whom he shared a deep musical partnership.

This newly released three-CD collection documents a decade’s worth of the pair’s recordings, including a 28-page booklet brimming with information and photos. A generation Thielemans’ junior, Franken, who never sought migration to become a New Yorker, remains legendary in Western Europe. A busy studio musician, he recorded with numerous artists, spreading the sounds of the Fender Rhodes and the Hammond B-3 organ throughout the region. He and Thielemans founded a quartet in the early ‘70s and continued this musical partnership until Franken’s untimely death in 1983; Thielemans, during the pianist’s funeral, played a solo rendition of “Nature Boy”, tearfully commemorating their final studio session.

Fittingly, this collection places the pair’s recordings in reverse order across the discs, with the Nature Boy set out front. The opening number is a rousing “What is This Thing Called Love?”, with Thielemans pronouncing Cole Porter’s timeless melody and the very Chick Corea-inspired Franken establishing a cooking samba just beneath, the band—guitarist Peter Tiehuis, bassist Theo de Jong and drummer Bruno Castellucci—easily adapting the tempo and feel of “Spain” as the basis. A series of jazz standard ballads are also included, “Lush Life”, “Midnight Sun”, “Daydream” among them, and, as per the period’s commercial mellowness, the production tends to numb the ear, yet in Thielemans’ chromatic harmonica, little is lost even with the most inane music on the call sheet. However, “Nature Boy”, largely a Thielemans-Franken duo, ranks among their best and with Mingus’ “Goodbye Porkpie Hat”, the inherent darkness and blue core are exacted artfully. Listen, too, for deeply moving film music (“Yves et Danielle” by Vladimir Cosma and “The Summer Knows” by Michel Legrand), as well as Pastorius’ “Three Views of a Secret”.

Disc Two, Absorbed Love, recorded in the mid to late ‘70s with a different ensemble (bassists James Leary or Wim Essed, drummers Eddie Marshall or Peter Ypma, guitarist Joop Scholten), largely eschews pop and focuses on jazz standards including Lee Morgan’s “The Sidewinder” and Ellington’s “In A Mellow Tone”. Corea’s “Crystal Silence” is given special treatment with the inclusion of Ferdinand Povel’s flute. Happily, Thielemans’ whistling is heard on several cuts, his guitar doubling octaves below. A different version of “Yves et Danielle” is included and compares favorably with the later take. Even with the abundance of mellow sounds, magic is to be found.

Disc Three, Together, cut in 1973, opens with Thielemans-Franken’s Latin-esque “Old Friend”, guitar fitted with a wah-wah pedal. The disc comprises film music and standards (Thielemans’ “Bluesette” among them) as well as shiver-inducing renditions of Antônio Carlos Jobim’s “One Note Samba” and “Wave” that sound like they were composed only for this pairing.